Good News! In court Nov. 19, the DA declined to prosecute Alice O’Malley and Allie Ryan for blocking the construction entrance to the tennis courts on Nov. 1 when when destruction of East River Park was to begin. They were in and out of court in 10 minutes when their desk appearance tickets were dropped.

We asked for a Temporary Restraining Order–TRO–on Nov. 2, 2021, to halt destruction of East River Park. It was granted on Nov. 4 and work stopped. The TRO is still in effect as of Nov. 20.

Here’s what has happened so far: Monday, Nov. 8, our attorneys, Arthur Schwartz and Kathryn Freed, replied to the city’s reply to our plea to the court. We asked to continue the TRO until a ruling in the appeal of our lawsuit for Alienation—state oversight of the project.

Nov. 17, there was a new TRO hearing on the MWBE lawsuit. Arthur Schwartz and Kathryn Freed represented East River Park Action. The judge put off the hearing until Monday, Nov. 22. A trial on the substance has been scheduled for 12/7. IPC (the contractor on the East Side Coastal Resiliency project that was to start Nov. 1) has now also been made a party in addition to City.

If the court rules in our favor, the TRO stops construction until the Appellate Court makes a decision on the appeal, which can take weeks or months. After that we proceed depending on what the decision is, but the gist of our suit is that the park plan must be ruled upon by, and should be under the oversight of the State Legislature. So if we win the appeal, everything would halt until the state reviews the plan and decides if it goes forward in its current shape or needs to be revised.

We know there’s a better plan that will give us flood control and preserve much of our park. We hope this suit gives us a chance for a do-over before our park becomes an environmental disaster that will harm our neighborhood’s physical and mental health and the health of the planet.

You can read our application here: https://iapps.courts.state.ny.us/fbem/DocumentDisplayServlet?documentId=ZTH3NTsVknF8a1xXnyv5jw==&system=prod Thank you Arthur Schwartz, our attorney. We’ll keep you posted.

The city replied on Friday (link to come when I relocate it). Here is the reply to the city’s reply, filed Nov. 8: https://iapps.courts.state.ny.us/fbem/DocumentDisplayServlet?documentId=zTFCGyUjDeLGjpZY1QwMdw==&system=prod

Keep an eye on the contractors

Please join in monitoring construction (DESTRUCTION) in East River Park weekdays 7AM – 3PM. Take photos and video of work you see. You can help prevent further destruction. Post right away and tag @ERPAction on Twitter and Instagram and tag #EastRiverParkWatch or email ourpark@eastriverparkaction.org

Note: We said in our reply on the TRO that we don’t object to putting in the planned lawn at the site of the compost yard–the compost was already moved to Staten Island. If you see work at the compost yard, that’s ok. The work south of the Corlears Hook ferry stop is part of Pier 42, not the ESCR, so it’s also ok (though we wish they’d hurry). Work on Stuyvesant Cove Park and above is also outside the ESCR lawsuit. Workers can also be in the East River Park, but they can’t be doing anything destructive.

And in other lawsuits

The high bidder for the ESCR, Tully, sued the low bidder, IPC, who started work on Nov. 1 (but are currently thwarted by our TRO). They lost but appealed, and Nov. 12, the appellate court heard their arguments—that bid requirements were not followed at time of bid opening regarding experience. They also said all the partners names had not been disclosed.

IPC and City said they had flexibility in joint ventures to amend bid qualifications which Tully said would corrupt bidding system.

Tully argued to either send it back to lower court or re bid. They mentioned that since there was a pause due to other litigation (ours) that they had time to void existing contract.  Stay tuned.

from The Village Sun, about another lawsuit we are party to:

Lawsuit: East Side resiliency project ‘a profound act of discrimination’

A new lawsuit in the fight over East River Park charges that Mayor de Blasio and his administration are not promoting equity but — just the opposite — massive discrimination via the contract awarded for the park’s embattled coastal-resiliency project.

The plaintiffs include The Black Institute and its president, Bertha Lewis; the Women Empowerment Coalition of NYC and East River Park ACTION.

Read about our letter and add your voice:
https://eastriverparkaction.org/2021/09/30/hochul/

To get involved in LES Breathe, the East River Park Action effort to monitor and improve air quality during this project, contact LESbreathe@gmail.com

LES Breathe
Thanks to your support, LES Breathe has purchased air quality sensors. The first five PurpleAir real time monitors are being placed around the neighborhood, along with mobile sensors that work indoors or out. In coming weeks, these sensors will provide open data that will be shared on easy to use maps.

Also in the works:

LES Breathe has a growing number of volunteers – contact lesbreathe@gmail.com to get involved.

We filed a lawsuit April 2, 2021, to gain full access to the Value Engineering Study that was used as the justification for the East Side Coastal Resiliency plan in 2018. The city has withheld key parts of the study. Read about the suit here: https://eastriverparkaction.org/2021/04/05/lawsuit-filed-for-unredacted-value-engineering-report/

Meanwhile, our state alienation lawsuit lost on Aug. 20, 2020. We are appealing! (See top of the page for the latest.) Here’s a good story on the basis of the case: https://thevillagesun.com/appeal-planned-in-east-river-park-resiliency-case

Please donate to our Legal Fund–we are a 501(c)3 so donations are tax deductible.

Right now, we are asking City Council Members (CCMs) to hold a hearing on the viability of the East Side Coastal Resiliency plan that will destroy East River Park. Alternatives are possible. In light of the recent uncovering of the heavily redacted Value Engineering Study that was used as the justification for the ESCR, we need to demand transparency and a reevaluation.

Please call, email, or Tweet your CCM and CCM Justin Brannan, who is chair of the waterfront and resiliency committee. Contact information below.

Unless we get a change in the East Side Coastal Resiliency plan, the city will close 60% of East River Park and fill the rest of the park and our neighborhood with construction dust and noise. 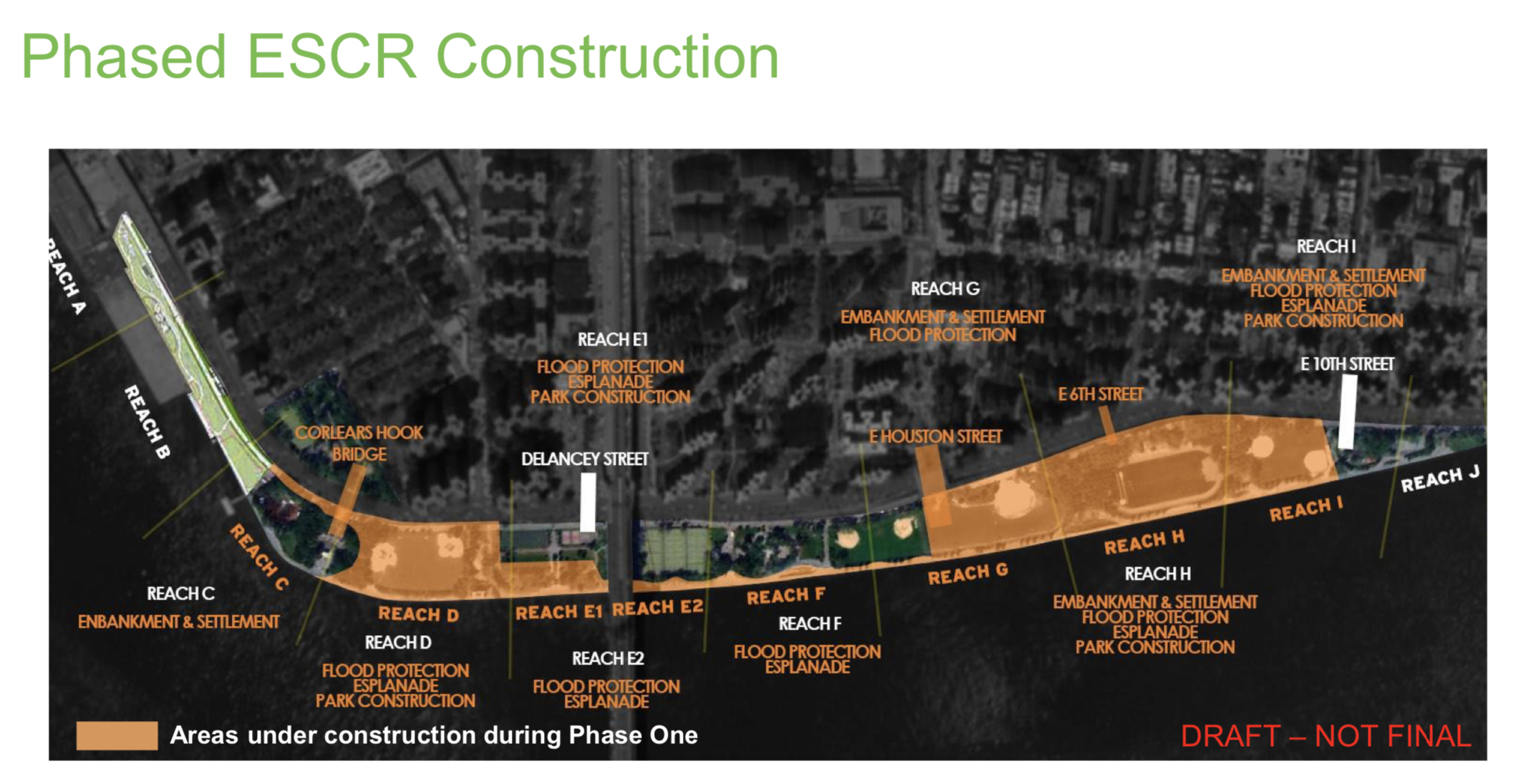 We still have time to demand a better plan that will preserve our park and give us flood control. Ask city officials to revise the ESCR to a less destructive plan and move some of the capital funds to other important capital projects such as affordable housing. (Capital funds such as the ESCR’s can only be moved to other capital projects–buildings and infrastructure projects–not operating expenses, unfortunately.)

Join the fight. Write to us to join our email list, ask questions, or send ideas.

Here are reasons to cite when you call, write or Tweet public officials:

Without intervention, the City will start bulldozing 1.2 miles of beloved riverfront park this fall for a controversial flood control project.

Razing the park will be an environmental injustice and public health crisis for our crowded Lower East Side and East Village communities with many people of color, elderly and low-income residents. This neighborhood also has a high Covid-19 infection rate–on top of already high rates of asthma and upper respiratory ills. Especially during this pandemic, our community needs parkland for physical and mental health, a place to be outside and maintain social distance.

NYCHA campuses adjacent to the park have had hundreds of trees felled, been surrounded with chain link fences and have ongoing heavy construction for a separate flood control project. There is no place in our crowded neighborhood to go for fresh air, peace and health–except East River Park.

Here is some background on the project that resulted in a death sentence for East River Park despite fierce opposition:

After Hurricane Sandy, the city worked for years with the community to develop flood wall plans along the FDR and to make the park resilient to survive storm surges. Yet in late 2018 NYC suddenly adopted an expensive, resource intensive, destructive plan. NYC’s $1.45 billion ESCR—East Side Coastal Resiliency—project will close and flatten East River Park in phases beginning with 60% of the Park early 2021. The ESCR will cover the Park in 8 feet of imported fill (nearly a million tons) as flood protection and will rebuild the Park on top. It will surely take longer than the City’s timeline of 5 years.

Now, even in the face of a pandemic when we need park space more than ever, the city is on schedule to proceed with this harmful ESCR.

A mandate that the city keep the entire park open at least while we face the pandemic would make a big difference for our neighborhood. Besides enabling our unwealthy community to maintain our physical and mental health, this pause will give the city time to reconsider immediate and long-term flood control that will preserve our park.

Daniel Dromm, Chair Of The Council Finance Committee
This committee is responsible for reviewing and modifying the City budget.
212-788-7066 or 718-803-6373
dromm@council.nyc.gov
@dromm25

Vanessa Gibson, Chair Of The Finance Committee’s Subcommittee On Capital Budget And Finance
718-588-7500 or 212-788-6856
district16bronx@council.nyc.gov
@VanessaLGibson

Mayor De Blasio does not have a public email address.
Call 311 to leave a message.
Send messages through their direct contact pages on the NYC government website: https://tinyurl.com/deblasioemail
@NYCMayorsOffice

Below is 1 of 3 sensors on the Lower East Side. See them all at Air Quality page.
Loading PurpleAir Widget...

Contribute to our nonprofit East River Park Action
using PayPal or a credit card.
You can use the dropdown menu to choose:
* LES Breathe (air monitoring and environment)
* Legal Fund (for accountability and transparency)
* Raising Hell (demand a better plan!)

Visit our ACTIONS NOW! page to find out what you can do to #SaveEastRiverPark

This wonderful park we are trying to preserve is forever Indigenous land of Lenapehoking. We hope to honor and respect the land of this park by advocating its use as a resilient flood-absorbing sponge working with the river-side ecosystem, rather than in defiance of it. We oppose the ESCR project that continues assault on the land and recognize it adds a layer of injury to the ongoing systemic oppression of the original stewards of this land, the Lenapeyok People.